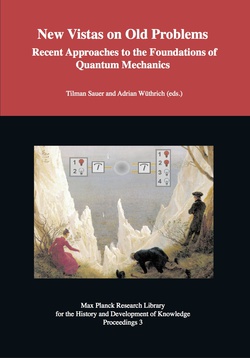 Recent Approaches to the Foundations of Quantum Mechanics

Recent approaches to long-standing questions about the foundations of quantum mechanics.

Quantum theory has been a subject of interpretational debates ever since its inception. The Einstein-Podolsky-Rosen paradox, the empirical violation of Bell’s inequalities, and recent activities to exploit quantum entanglement for technological innovation only exacerbate a long-standing philosophical debate. Despite no-signaling theorems and theories of decoherence, deep-rooted conflicts between special relativistic principles and observed quantum correlations as well as between definite measurement outcomes and quantum theoretical superpositions persist.
This collection of papers, first presented at an international symposium at the University of Bern in 2011, highlights some recent approaches to the old problems of a philosophy of quantum mechanics. The authors address the issues from a variety of perspectives, ranging from variations of causal theory and system theoretic interpretations of the observer to an empirical test of whether entanglement itself can be entangled. The essays demonstrate that the discussion about the foundations of quantum mechanics is as lively and interesting as ever.

Measurement of a Quantum System

On Free Will and No-Conspiracy
Iñaki San Pedro

(How) Did Einstein Understand the EPR Paradox?
Tilman Sauer

Quantum Theory as a Method: the Rule Perspective
Simon Friederich

Causal Realism in the Context of Bell-type Experiments
Matthias Egg

Locality, Causality, and Realism in the Derivation of Bell's Inequality
Adrian Wüthrich

Entanglement as an Element-of-Reality
Philip Walther