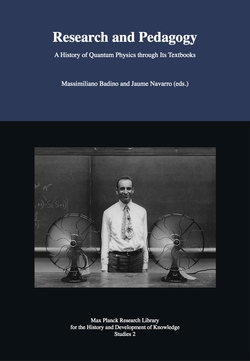 A History of Quantum Physics through Its Textbooks

This book addresses how new ideas in emerging quantum physics were introduced in textbooks.

Historians of quantum physics and early quantum mechanics have seldom paid attention to the ways the new theory was integrated in physics textbooks, perhaps taking for granted that novelties in science can only be taught once they are fully understood and generally accepted. The essays in this volume challenge this view by studying some of the early books and textbooks in which quantum theory was first introduced. By so doing, the authors show the many ways books and textbooks embody pedagogical and research practices in certain local environments (geographical, disciplinary, in terms of expertise, etc.), as well as the circular feedback between research and pedagogy.

Textbooks can become the subject of a history of early quantum physics since the very process of writing a textbook, (i.e., of trying to organise a new doctrine to the newcomer in an accessible way), together with its life as an object that is issued, used, changed, and abandoned, incorporates many of the tensions between research and pedagogy. Furthermore, the life of these books can also help us better situate less known actors in the history of quantum physics, by bringing into the picture the reasons, the context, the research agenda, and other aspects that cannot be found in the publication of research papers or in the abundant correspondence between the main physicists involved in this story.

The case studies collected in this volume may, at first glance, look like a heterogeneous set. Some books were not, in fact, primarily addressing quantum theory as such, but including some of its early principles in re-shaping the established foundational principles and modes of teaching in fields such as optics and physical chemistry. Others were written by scientists not directly involved in the development of the new physics, and their books were addressed at an audience interested in having only a superficial knowledge of the theory of quanta. Finally, the main actors in the formulation of quantum theory wrote books on the quantum for different purposes: as a way to organise their thoughts, to spread a particular interpretation of the theory, or to press for their personal research agendas, among others. This heterogeneity is, however, the tool the editors use to give a full picture of the role of early textbooks in the history of quantum physics.

2 Sorting Things Out: Drude and the Foundations of Classical Optics
Marta Jordi Taltavull

10 Paul Dirac and The Principles of Quantum Mechanics
Helge Kragh

12 Epilogue: Textbooks and the Emergence of a Conceptual Trajectory
David Kaiser